Kimono is a Japanese tradition, art, technique and culture.
Kimonos can be divided into many types according to their place of origin and manufacturing method. In this page, We would like to introduce some of them.

First of all, there are five main types of yarn materials.

●Raw silk is made from cocoons that have been carefully unraveled and reeled out. The cocoons of the silkworms are unraveled and reeled out into fine threads, which are then interlocked to make a thread thick enough for weaving. Raw silk cannot be produced if there are more than one larva of the silkworm or if the cocoon ball has an awkward shape.

●Silk yarn is spun from cotton made from cocoons that are unsuitable for making raw silk. The cocoons, made by two silkworms together, or waste cocoons that are scoured, and made into cotton, which is then pulled out by hand into a continuous thread, twisted and reeled. Compared to raw silk, it is uneven in thickness and has knots, which gives the fabric a unique taste when woven.

◎Silk also requires a process called degumming. The term "degumming" generally refers to the degumming of silk. In silk degumming, the collagen on the surface of the silk, called Cecillin, is removed by boiling with soapy soda. By degumming silk, a beautiful luster and suppleness can be obtained. There are two types of degumming: "pre-degumming," in which the silk is degummed before being woven, and "after-degumming," in which the raw silk is degummed after being woven.

The second is cotton. It is a material that is widely used in clothing, but is also used in many kimonos. The yukata is a typical example.

The third material is hemp. It is often used for everyday summer kimonos because the material is breathable and moisture absorbent, making it cool and comfortable to wear. It is made from a ramie fiber called Ramie (Karamushi, Choma). This is because Ramie yarns are thick and long, and the fibers are strong and firm, making it a suitable material for kimonos.

The fourth is wool. Wool is an animal fiber that comes from sheep. Wool is widely used in clothing, but is also used in kimonos. Since it does not wrinkle easily and is easy to move around in, it can be easily enjoyed as daily wear. Since it is a thick fabric, it is often tailored as a single garment, but its heat-retaining properties allow it to be worn warmly in three seasons, including winter.

The fifth is synthetic fiber. A kimono made of polyester or other "synthetic fibers" (= chemical fibers). Resistant to water, can be worn on rainy days, and can be washed at home. Cheap. Polyester kimonos are not very breathable, so they accumulate heat and become hot in the summer. In the winter, the kimono does not heat up well because of its poor thermal conductivity, and it is also cold because it is hard to fit the body.

Different types of kimono can be distinguished depending on how they are made and where they made. 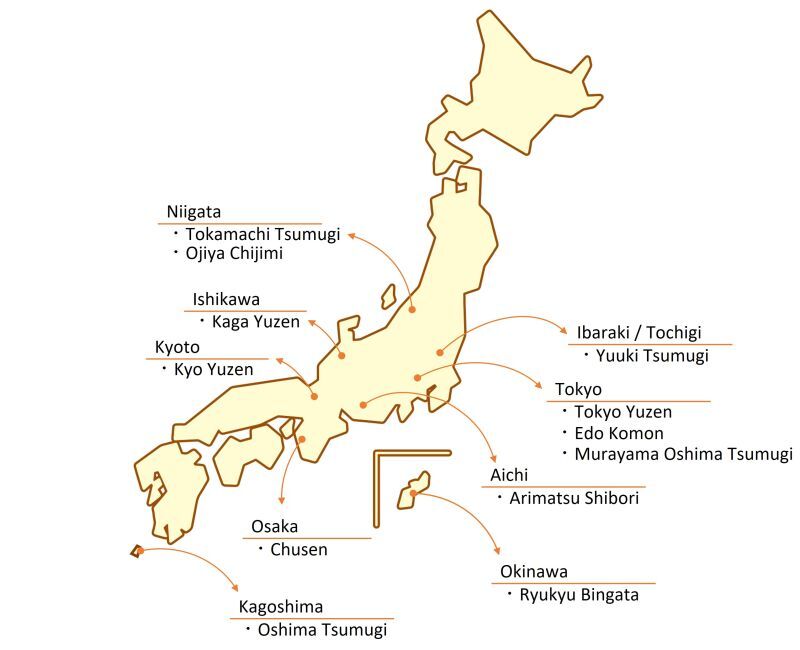 There are two main types: dyed kimono and woven kimono.
Dyed kimono is made by woven fabric while it is still white and then dyeing them to make a single piece of fabric, which is called "after-dyed (Atozome in Japanese)". After-dyed kimono also requires multiple processes by craftsmen such as stencil dyeing, hand-painting, embroidery, and gold leaf processing. This is the image of the gorgeous kimono that people generally think of.

A woven kimono is one in which the white threads are dyed first and then woven, which is called a "pre-dyed (Sakizome in Japanese)" or woven kimono. There are various types of kimono, such as those woven with only one color of yarn, those woven with yarn dyed in various colors, and those woven with one yarn dyed in multiple colors to produce a pattern when woven. The pattern and color of the finished kimono are decided in advance, and a precise blueprint is sometimes drawn, so it is a very labor-intensive weaving process that requires the handwork of highly skilled craftsmen. Most of them , which is pre-dyed kimonos, mainly called TSUMUGI.

We would like to introduce example of woven kimono in next page.
Back to Index