An obi is an indispensable part of a kimono.
Many people are probably confused by the different types, lengths, and shapes.
Obis have also changed their shapes as time has gone by. What I am going to introduce here is what has become the standard for wearing a kimono today.

This is the widest and largest obi. The obi is made by weaving a wide obi (approximately 70 cm) and folding it in half to form a pouch. Unlike today's Fukuro obi, both sides of the obi have the same pattern, making it very gorgeous. Since it cannot be worn as it is woven, it is folded in half and tailored.
Approximate measurements: Width 68 cm / Length 448 cm
Matching kimono: Furisode (long-sleeved kimono), mid-Edo period, used as the most prestigious first formal dress sash until the prewar period.

Fukuro-obi is a simplified and lighter weight version of Maru-obi. It was named Fukuro-obi because it was woven in a bag-like (tubular) shape.
It is an obi made by combining a patterned fabric for front and a plain fabric for lining. Since this obi is often used for celebratory occasions, it is long enough to be tied in a "Double-layers-drum knot", which means "may your joy continue to multiply."
"Share-Fukuro obi(one point Fukuro obi)" without gold or silver threads may be worn with komon or tsumugi.
Patterned ones include those with a "zentsu" pattern (patterned throughout), those with a "rokutsu" pattern (60% of obi is patterned), and those with a point pattern.
Approximate measurements: Width 30-31.5 cm / Length 430 cm Matching kimono: Generally used for formal kimonos, such as "Tomesode for weddings," "Homongi," and "Furisode for coming-of-age ceremonies". 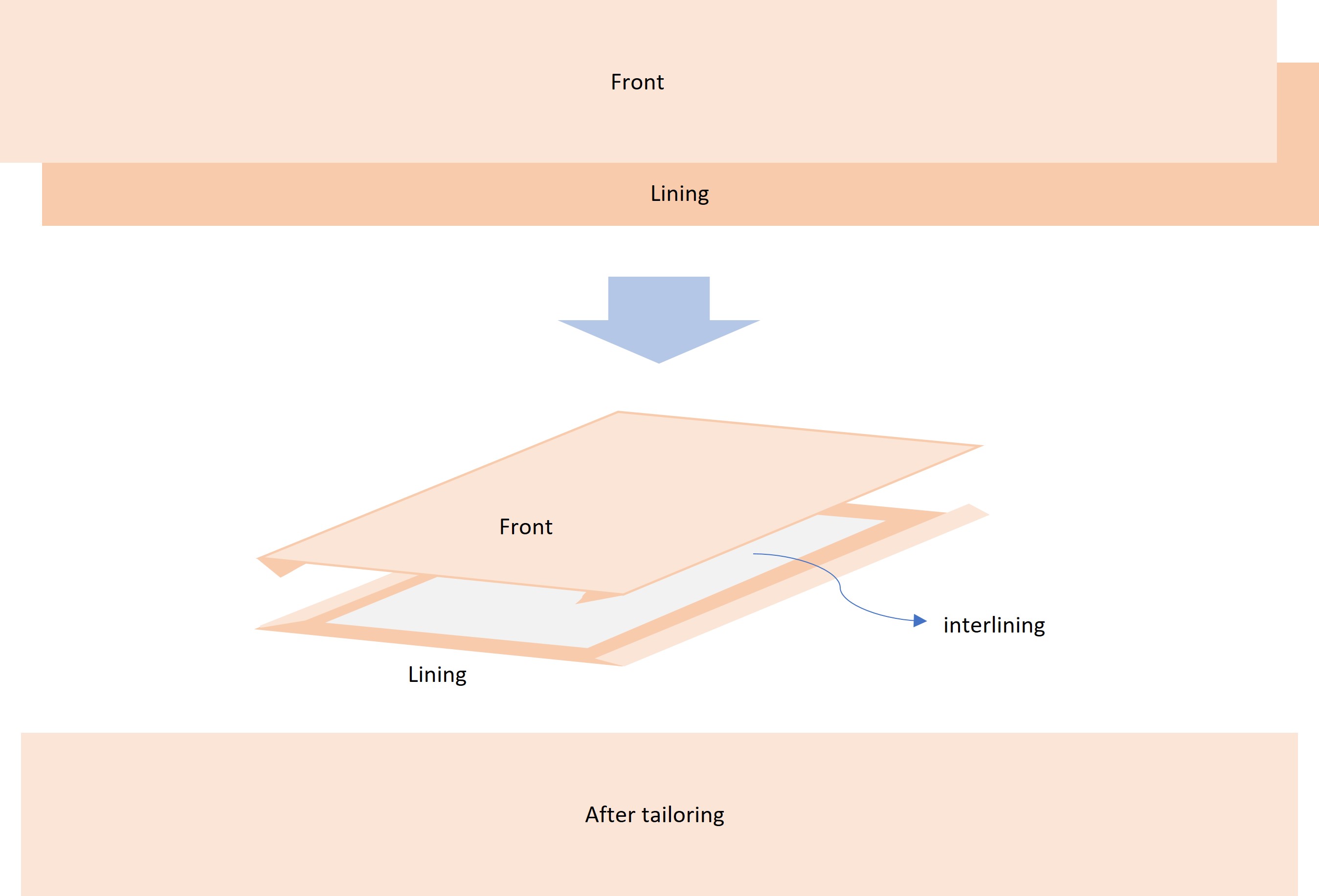 The Nagoya obi is a simplifed version of the Fukuro obi, which can be tied more easily.
Because it is just the right length for "Single-layer-drum knot", it is used with kimono called "everyday wear" such as komon and tsumugi.
Approximate measurements: Width 30.4 cm / Length 360 cm Matching kimono: Generally used for casual wear such as komon and tsumugi 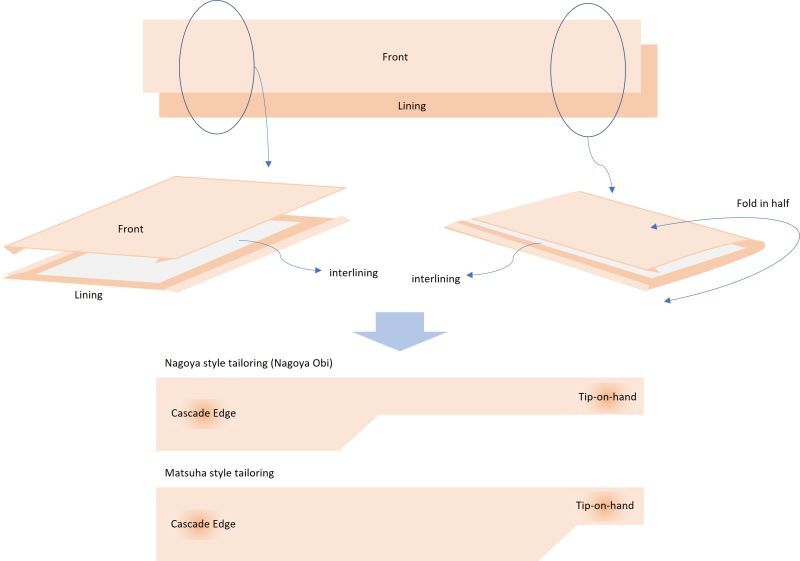 Nagoya style tailoring
This is a tailoring method generally known as Nagoya obi. Both ends of the obi are sewn with an interlining inside.
The part that wraps around the body is fold in half and the other edge is original width.
Approximate measurements: Width 30.5 cm / Length 350 cm

Hassun style tailoring
"Hassun" literally means approx. 30.5cm width. The width of this obi does not change as it is not folded at the edge without an obi interlining.
Because there is no interlining inside, and does not be used lining, it allows for better ventilation, so it can be worn in summer, but is also recommended for the single garment season.

Hiraki nagoya style tailoring
It is so called because the part that wraps around the body is no fold in half. We call it "Hiraki" which means "open".
The interlining of the obi is visible in the open part. This continues to the beginning of the cascade edge which makes "Single-layer-drum knot". The obi is lined with a lining. 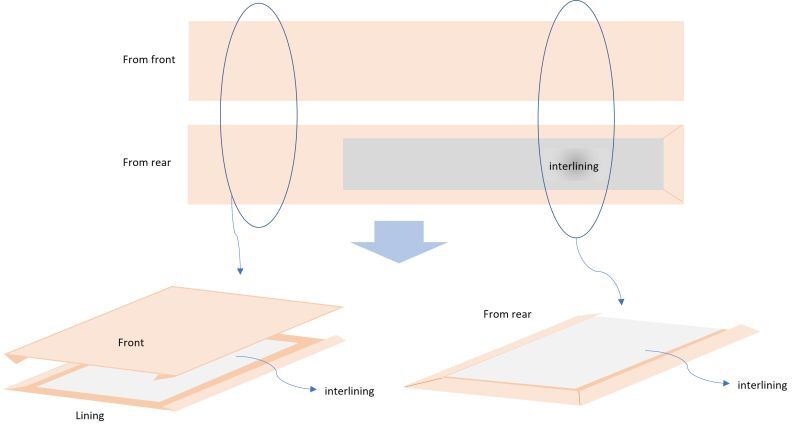 Kyo fukuro style tailoring
It is an obi with a width of about 30 cm and a length of about 360 cm to 380 cm. Compared to the "Fukuro obi," it is shorter and the same length as the Nagoya obi. 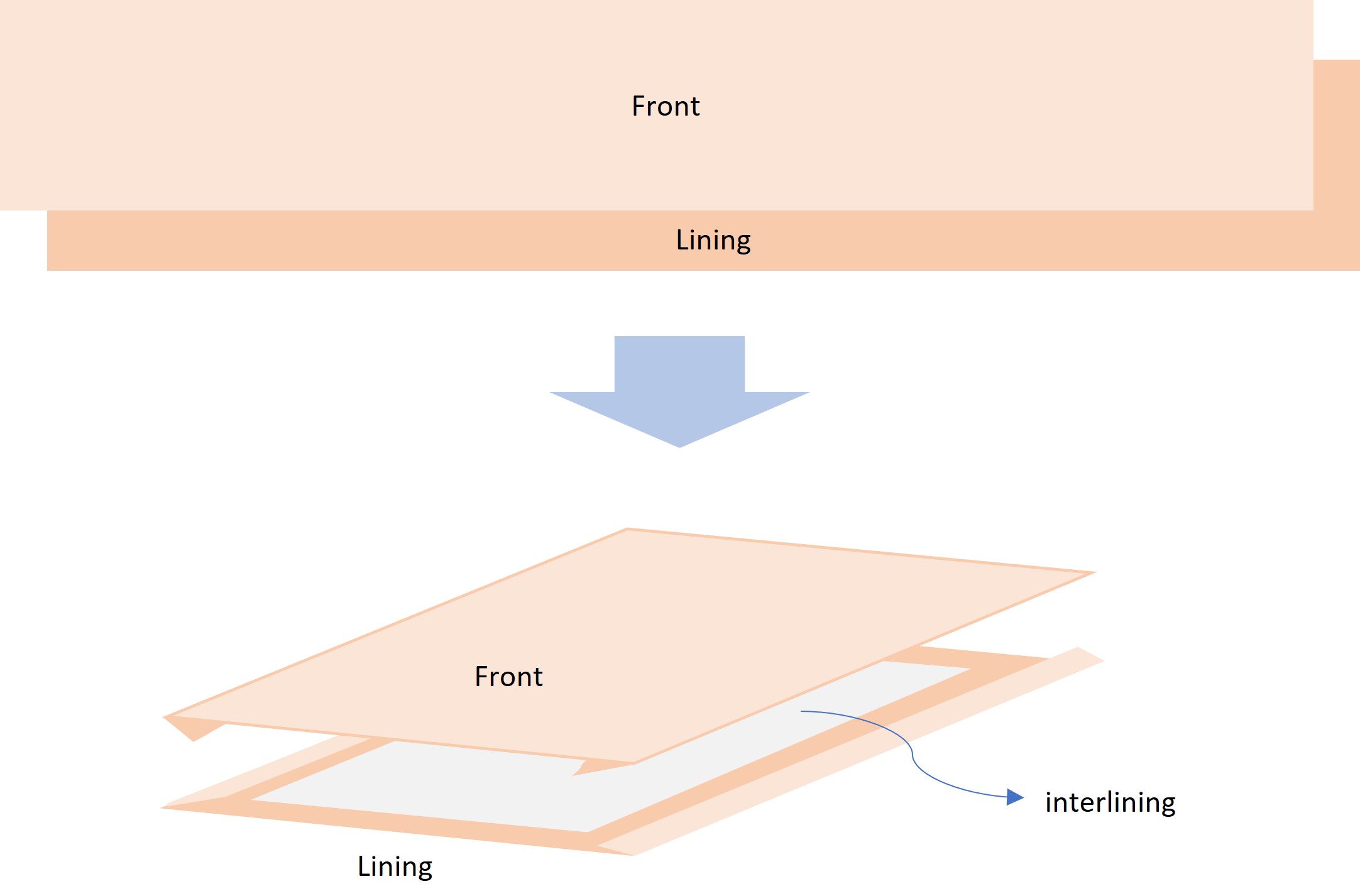 Originally, it was used as an obi when "the back of the obi is not visible," such as when wearing a haori.
The width is about a half width of Fukuro or Nagoya obi. "Hanhaba" means "a half width".
It is not suitable for formal wear, but is used for everyday wear such as komon, tsumugi and yukata.
Approximate measurements: Width 16-17 cm / Length 360-400 cm Matching kimono: Generally used for casual wear such as komon, tsumugi and yukata. 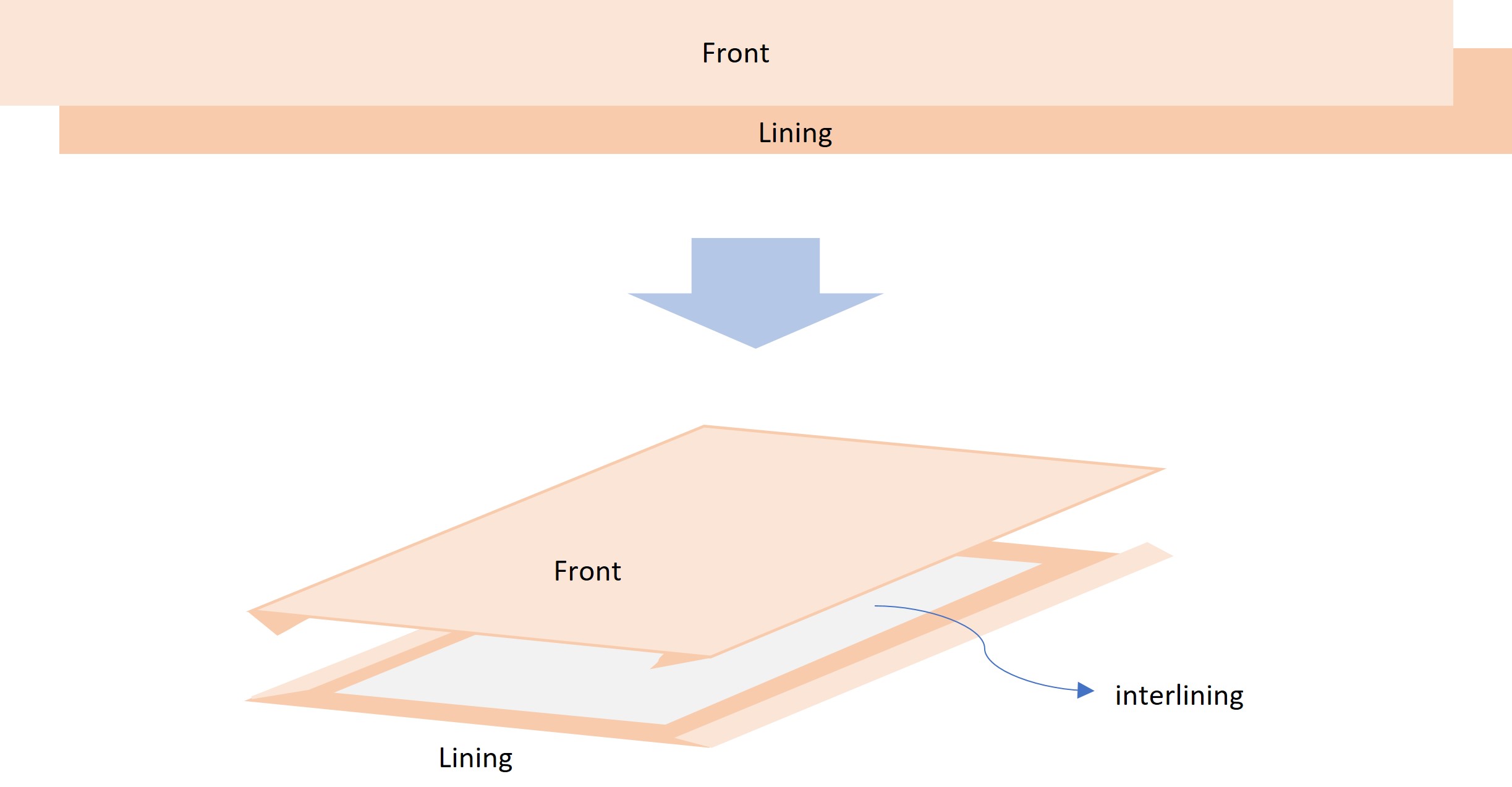 ※Double-layers-drum knot
The "Double-layers-drum knot" is a knot that is tied at formal occasions such as weddings, with the meaning of "May joyous occasions continue to overlap".
※Single-layer-drum knot
It is a simplified version of the Double layers drum knot for casual kimono such as komon and tsumugi.
※One-pointed-pattern
There is only one pattern or motif on the obi that has been seen when it is worn Single layer drum knot.