In Japan, there is a Japanese-English term called TPO.
This is an acronym for Time, Place, Occasion and represents a so-called dress code.
Basically, we would like our customers to enjoy wearing kimonos as they like, but kimonos also have TPO.
We do not say that it is a rule that you must follow, but we introduce it as a part of Japanese culture.

Kuro-Tomesode is the most prestigious "first formal wear" of kimono that can be worn by married women.
It is mainly worn by the bride's and groom's relatives and matchmakers for celebratory occasions such as weddings and wedding receptions. It is worn as an expression of gratitude and courtesy to the guests who have come to the wedding ceremony and reception.
Kuro-Tomesode is a plain-weave silk kimono with a black base color and no based woven pattern, and has a hem pattern across the seam called an "Eba-pattern". Many of the "Eba-patterns" are wonderfully gorgeous with yuzen dyeing, embroidery, and gilding.
Kuro-Tomesode has only five crests.
It does not include three crests or a single crest like the Iro-Tomesode.

Furisode is the most prestigious formal kimono for unmarried women. It is a luxurious and gorgeous kimono with long sleeves and an overall pattern of feathers.
It is often worn at coming-of-age ceremonies to celebrate turning 20 and wedding receptions, and may also be seen at ceremonies and presentations.
It is the first formal attire for all attendees at funerals and farewell ceremonies. It is worn in memory of the deceased and as an expression of gratitude.

The feature of Houmongi is that the pattern is beautifully connected from the shoulders to the chest and sleeves as if it were a single picture, regardless of the seams (this is called the eba pattern).
Kuro-Tomesode and Iro-Tomesode have "Eba-pattern", but the characteristic of Houmongi is that the pattern is also drawn on the upper half of the body, such as the chest and sleeves, in contrast to the hem of those Tomesode, which only has a pattern on the hem.
"Houmongi" is a translation of "visiting dress," and the name became popular during the Meiji period (1868-1912) as social outfits for upper-class women.
In terms of class, Houmongi is considered semi-formal to informal formal wear. (depending on matching Obi) It is best suited for celebratory occasions such as weddings and parties.
For example, for a wedding reception, white, gold, and silver Obi can be worn together to create a highly prestigious outfit, while light-colored Obi can be worn together for a school entrance ceremony to create a flamboyant outfit.

In Tsukesage, patterns are arranged in sections so that they do not cover the seams. Because the pattern straddles the seam, the Tsukesage is slightly lower in rating than Houmongi, which requires more time and effort to tailor.
It is a versatile kimono that can be worn from a relaxed to a glamorous setting by raising or lowering the class of the obi, such as with a gold and silver thread Furkuro-Obi and accessories for formal wear, or with a highly fashionable Fukuro-Obi for theater.

Iromuji is a kimono with no pattern and dyed in one color other than black. The presence or absence of family crests and the number of crests determines the class of the kimono, and it can be worn in a wide range of ways.
Iromuji with five or three family crests is a semi-kimono and can be worn to weddings, entrance ceremonies, graduation ceremonies, and other such events if worn with a formal Obi.
If you have only one crest, it is an informal wear equivalent to a Houmongi or a Tsukesage.

Komon is a casual kimono for everyday wear. Although it cannot be worn for formal occasions, it is dyed by stencil dyeing or hand-painting, and is a gorgeous kimono filled with so many traditional techniques that it is hard to believe that it is for casual wear.
It can be worn with a fashionable Fukuro-Obi, Nagoya-Obi, or Hanhaba-Obi in an unlimited number of ways.

Tsumugi is a type of kimono woven mainly with yarn-dyed threads, and there are many Tsumugi production areas throughout Japan, such as Oshima Tsumugi and Yuki Tsumugi. Each has a different character and offers a unique luster and texture. 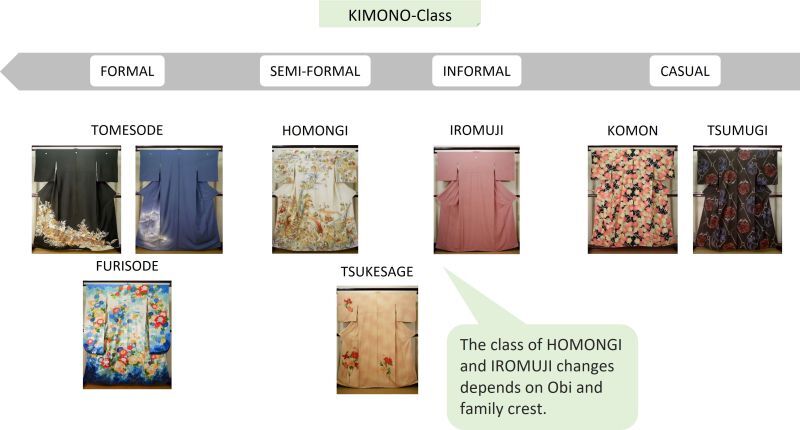